The redevelopment of one of Sydney’s most lucrative zones, Barangaroo, is having a transformative impact on the city’s landscape. Now ranked Australia’s largest carbon neutral community, the $6 billion regeneration of Barangaroo has seen the rise of some of Sydney’s most striking commercial office spaces and apartments, with green spaces contrasting with these urban areas to enrich the site’s panorama.

With 1,200m2 of SAS products installed in Baker McKenzie’s main lobbies, corridors, meeting rooms and break-out areas, this was a close-knit, ambitious project delivered to a tight deadline and without any compromise on quality. The client selected SAS due to its great relationship with Hassell Studio since branching into the Australian market. SAS had already completed other projects in Barangaroo; its base build was met with critical acclaim, achieving the highest green star rating

As SAS was familiar with the area’s aesthetic, the company was able to exceed the design intent and execution. Various SAS ceiling products were selected to meet the project’s overall aesthetic and function. Service maintenance was a priority in meeting rooms so the versatile SAS150 was selected for its accessibility, resilience, security and hygiene. As a linear design is prominent in the lobbies and in hallways, SAS750 battens were chosen for their ability to run the length of the corridor, opening up the space. This effect also featured in the break out area, elongating the room.

In terms of acoustics, a high level of sound absorption was required in the main lobby to prevent the presence of echo in the stairwell. For this reason, SAS500 baffles were selected as they met both the architect’s practical and aesthetic vision; as these double-faced panels increase acoustic performance, SAS500 was the ideal solution for the building’s open, exposed interiors. SAS740 baffles were specified for their design versatility. In the main breakout area SAS740 baffles fitted the curve of the space, achieving the multiple radii required within the area.

The Baker McKenzie fit out offered opportunities for design experimentation to take place. To adhere to the design intent, a bespoke SAS500 baffle was created containing a unique, grey tissue-faced acoustic infill within the baffle to brighten the ceiling in a naturally dark space. Creating light in dark areas is a challenging prospect; however SAS overcame this difficulty by working with the architect to develop a product to suit the space.

A further challenge was the ceiling height in the central breakout area. To even out the ceilings in this particular zone, Hassell Studio thought it best to drop the base build ceiling height but maintain the perimeter at its original height. This posed a significant challenge when it came to installing radial baffles in the area. As the ceiling space had reduced in size, specific radial baffles had to be manufactured to ensure quality and aesthetics were not compromised. To overcome this, SAS adopted an inventive installation approach; tightening the measurements of each radii to prevent any issues from occurring.

Completed in December 2017, the Baker McKenzie fit-out exceeds all of the requirements for sustainable design. A challenging project offering time for experimentation and innovation, SAS, Hassell Studio, contractor MPA Projects and subcontractor X-Clusive Group have created spaces to welcome one of the world’s leading law firms to Sydney’s most progressive business district. 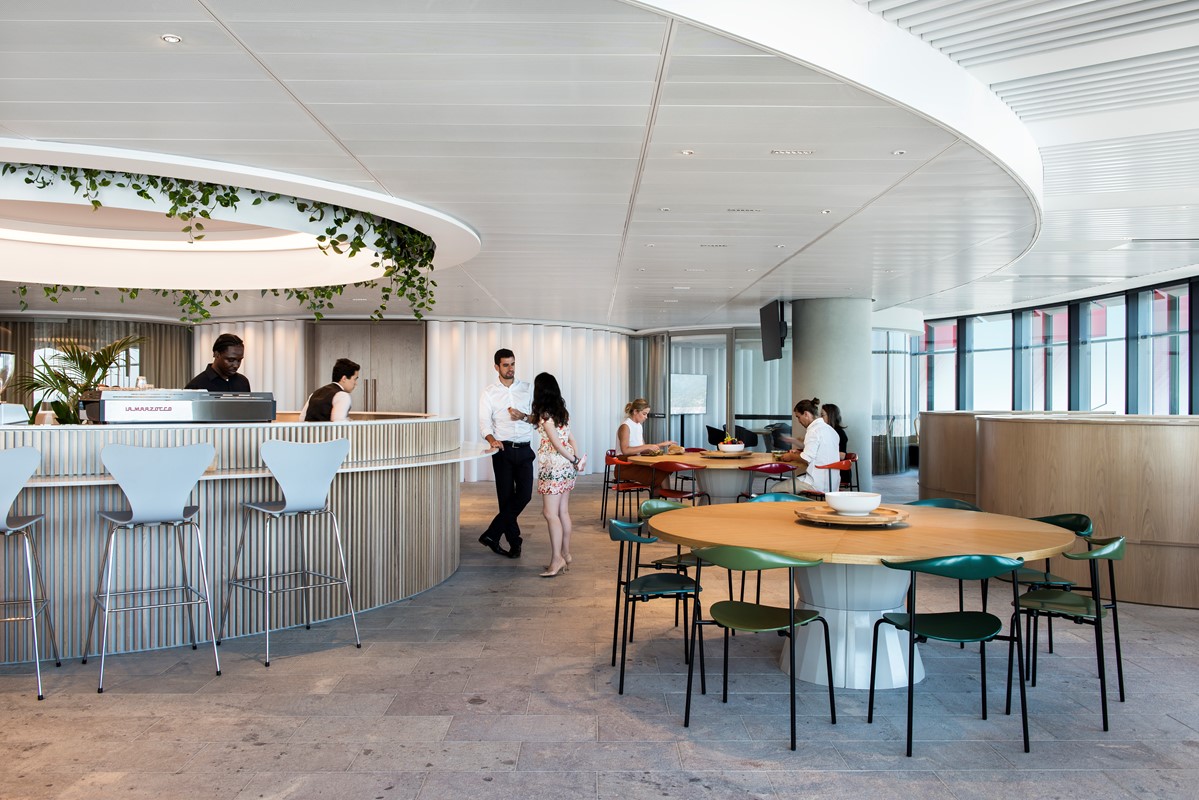 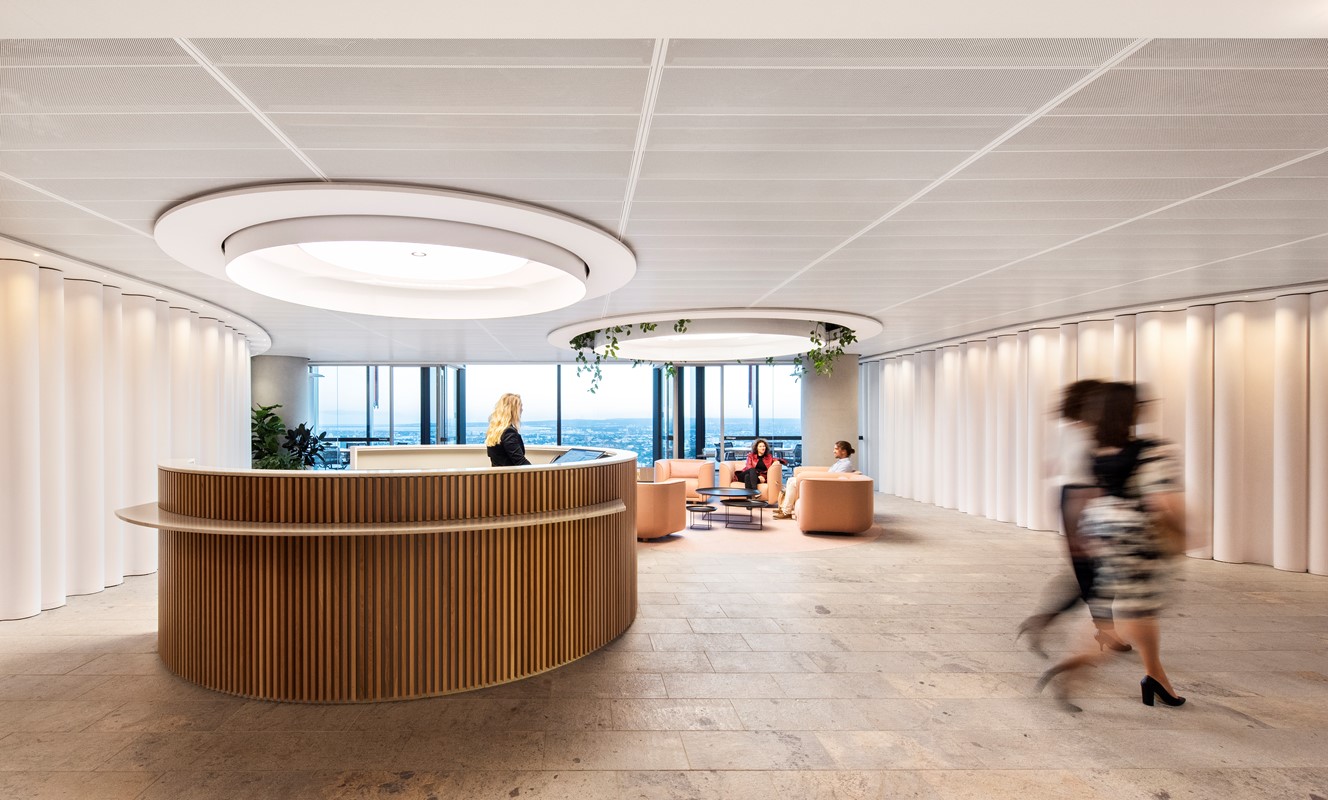 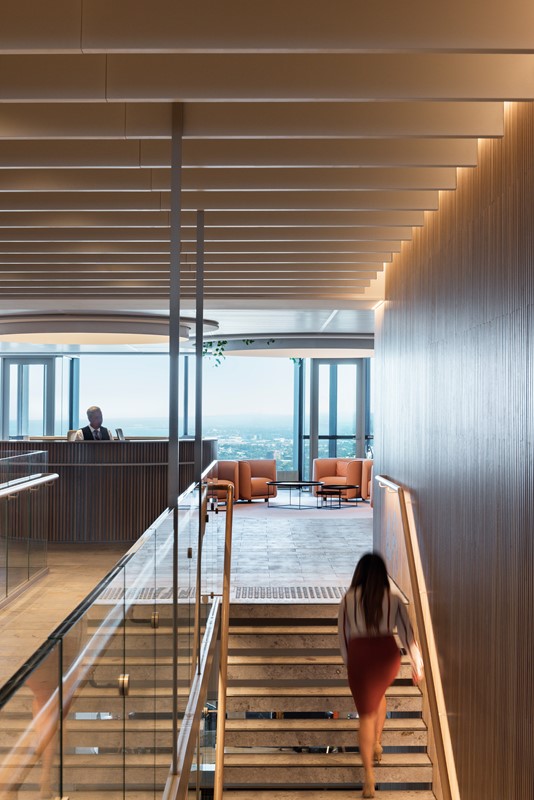 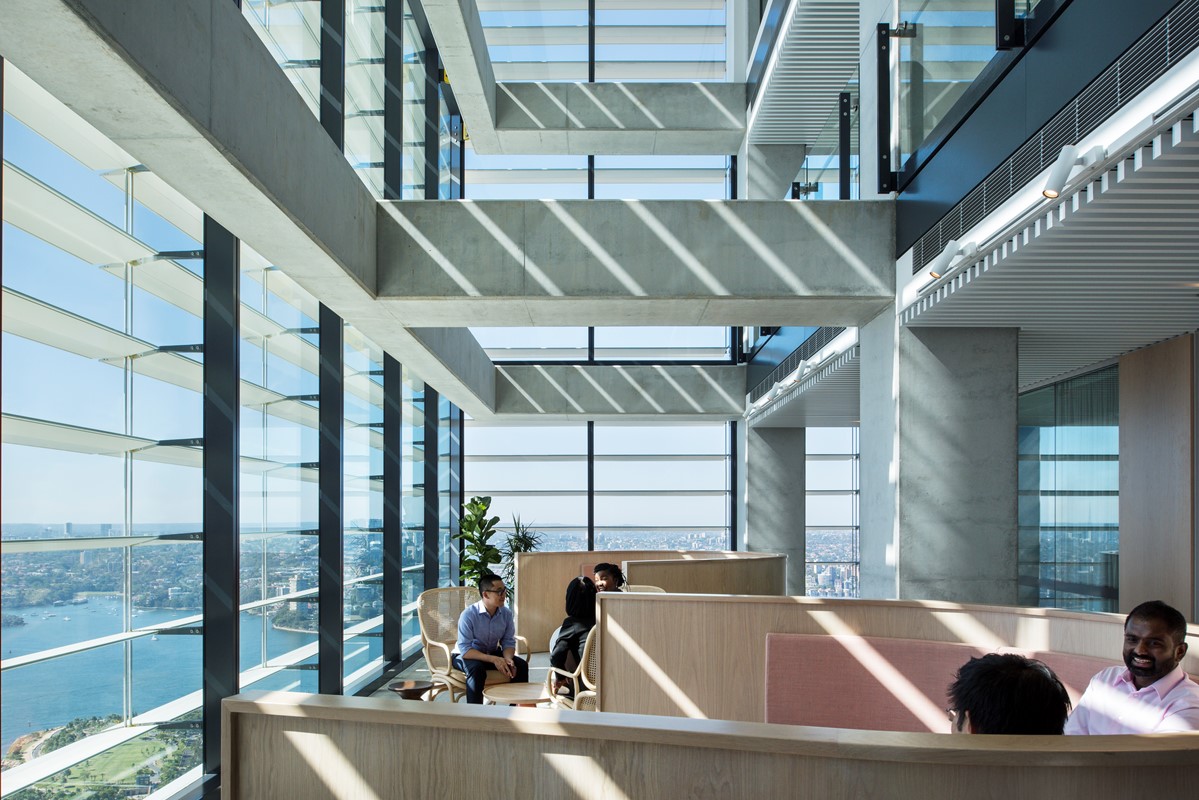 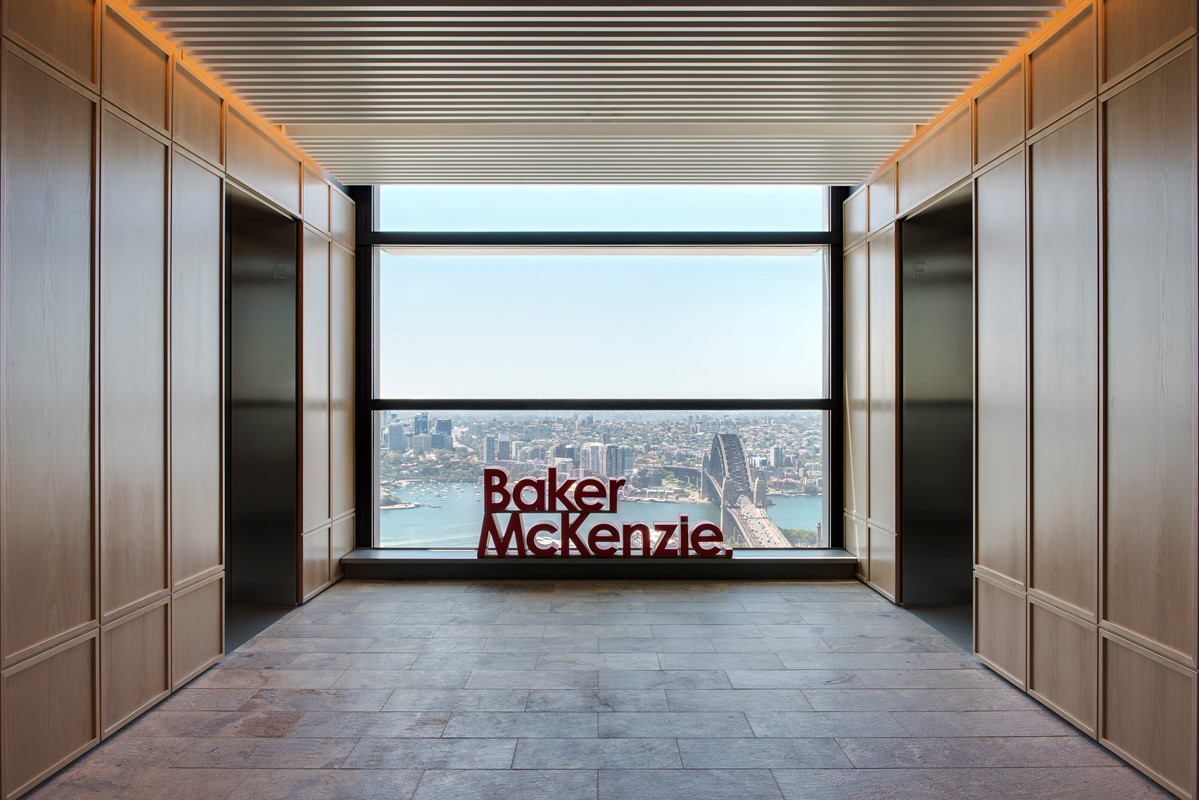 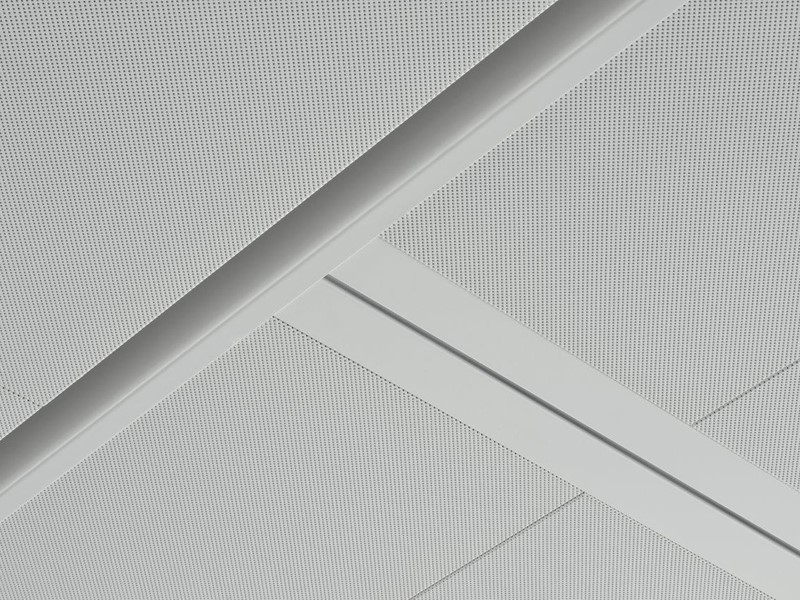 SAS330 forms part of our premium offering with a host of value-added design elements. 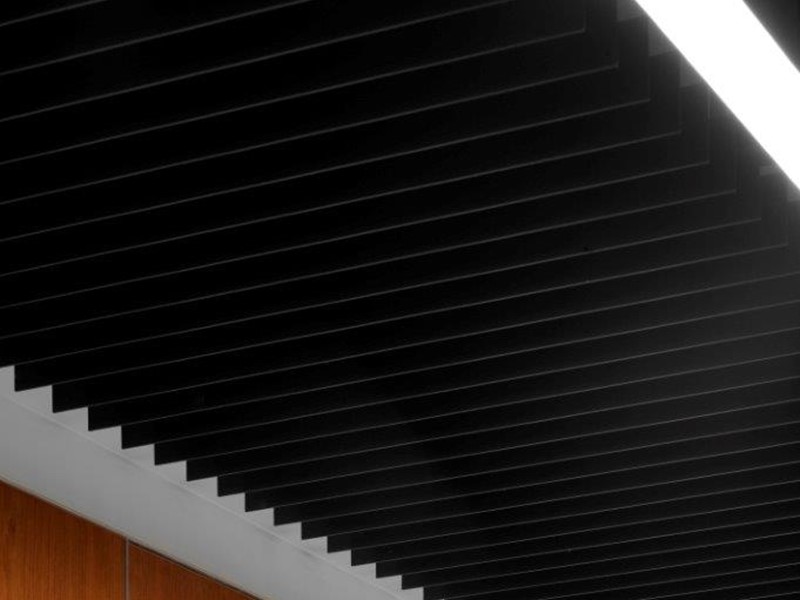 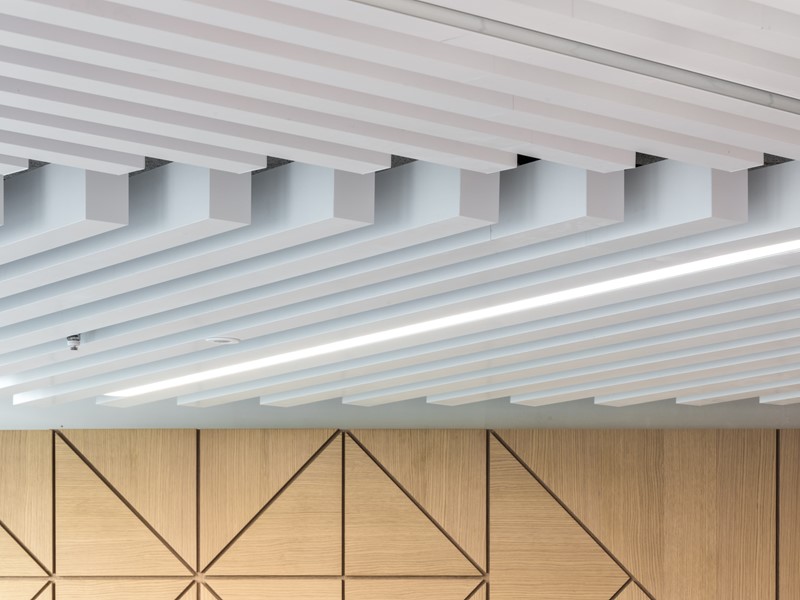 SAS740 is the most creatively versatile of SAS’ linear ceilings, able to accommodate complex geometry, extrusions and void access. 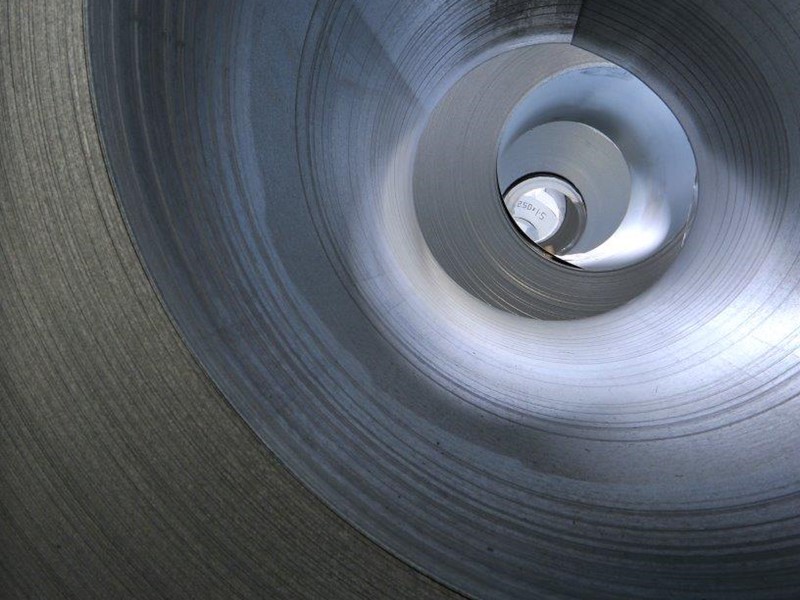 SAS International are committed to ensuring sustainability is at the forefront of any decisions made throughout the company.